The Rugby World Cup is a relatively new competition, with the first tournament taking place in 1987. The inaugural event co-hosted by Australia and New Zealand saw 16 Nations competing to lift the Webb Ellis Cup. The New Zealand All Blacks won the first World Cup beating France 29-9 in the final at Eden Park in front of an excited home crowd.

Since 1987 the RWC has been hosted by; England, South Africa, Wales, Australia, France and New Zealand. The right to host the 2019 World Cup was awarded to Japan; making it the first to be staged outside of a Tier 1 Rugby nation.

When Japan was announced as the 2019 RWC host nation, I was surprised but also intrigued. Having watched a game at the 2007 RWC in France, I was keen to experience the excitement of another World Cup. The trip would allow me to write about matches and the RWC first hand. Giving our sports-based websites much needed unique content. There was just one problem; travelling from England to France is relatively easy and cheap. Getting to Japan would be a different proposition altogether!

I researched flights, hotels, transport and match tickets for three group games at various locations around Japan. Initially, I wanted to arrange this myself. However, it became apparent that this approach would be a logistical nightmare. Looking online and found a tour company based in Dublin who could arrange everything, including match tickets. Club Travel is an official travel partner for the 2019 World Cup. They offered a package covering a 17-day tour which included three Ireland group matches along with numerous sightseeing tours between the games.

I compared the Club Travel package available to Irish fans with similar trips to watch England or Wales play at the RWC. The Irish package was cheaper, included more games and sightseeing tours. What finally sealed the deal was my partners’ nationality, being Irish she insisted on following Ireland! I never really had a choice.

Our trip started in Manchester for a quick flight to Dublin. Once in Dublin, we boarded a plane to Helsinki and then transferred for a ten-hour flight to Tokyo. After a surprisingly comfortable flight with Finn Air, we arrived in Tokyo mid-morning. It was a 1hr 30min transfer from Narita Airport to our Hotel in the Odaiba district. The Grand Nikko Hotel (Odaiba) was a fantastic place to stay. The area around the hotel is less busy than downtown Tokyo but with plenty to do and excellent transport links. 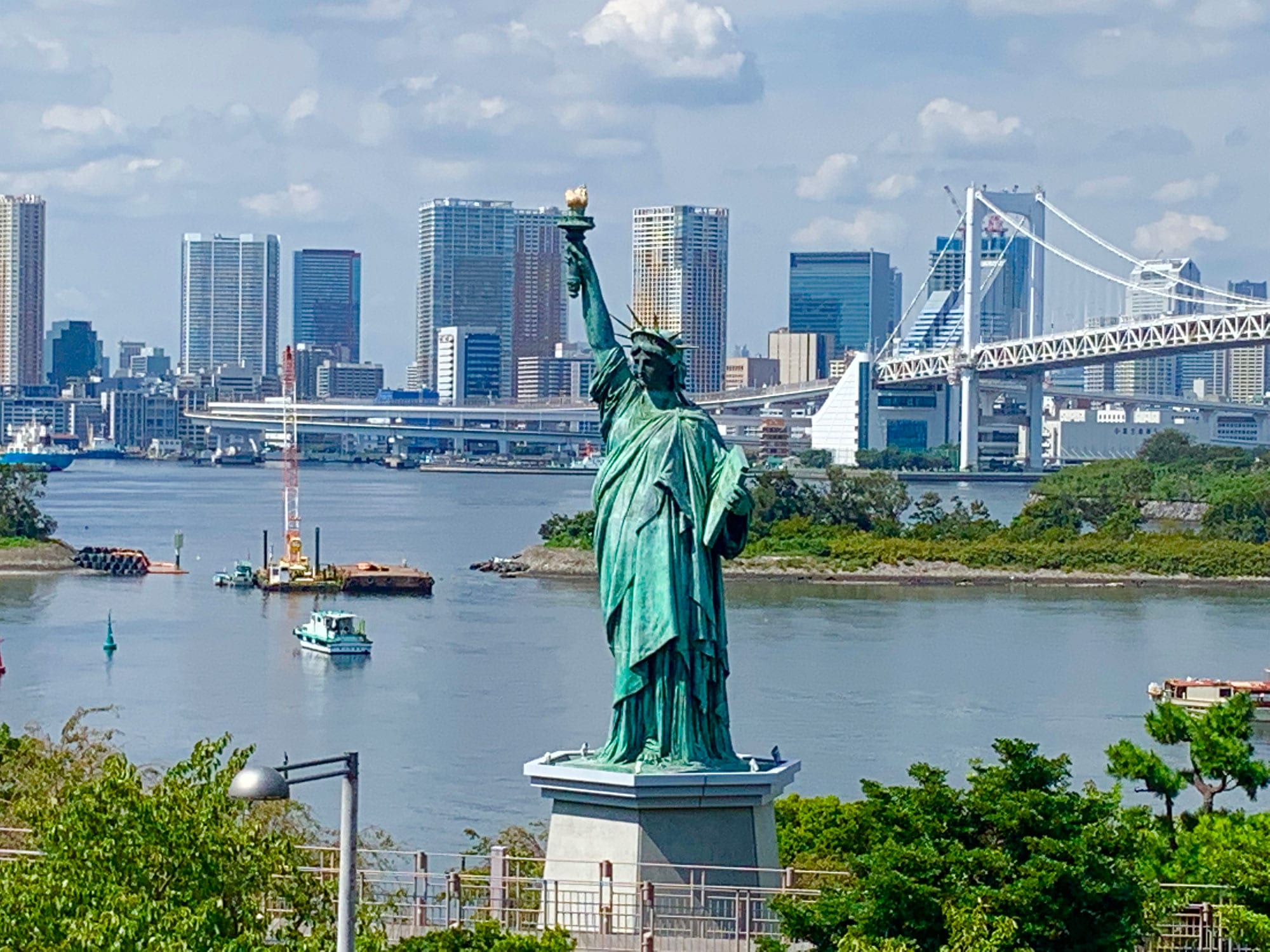 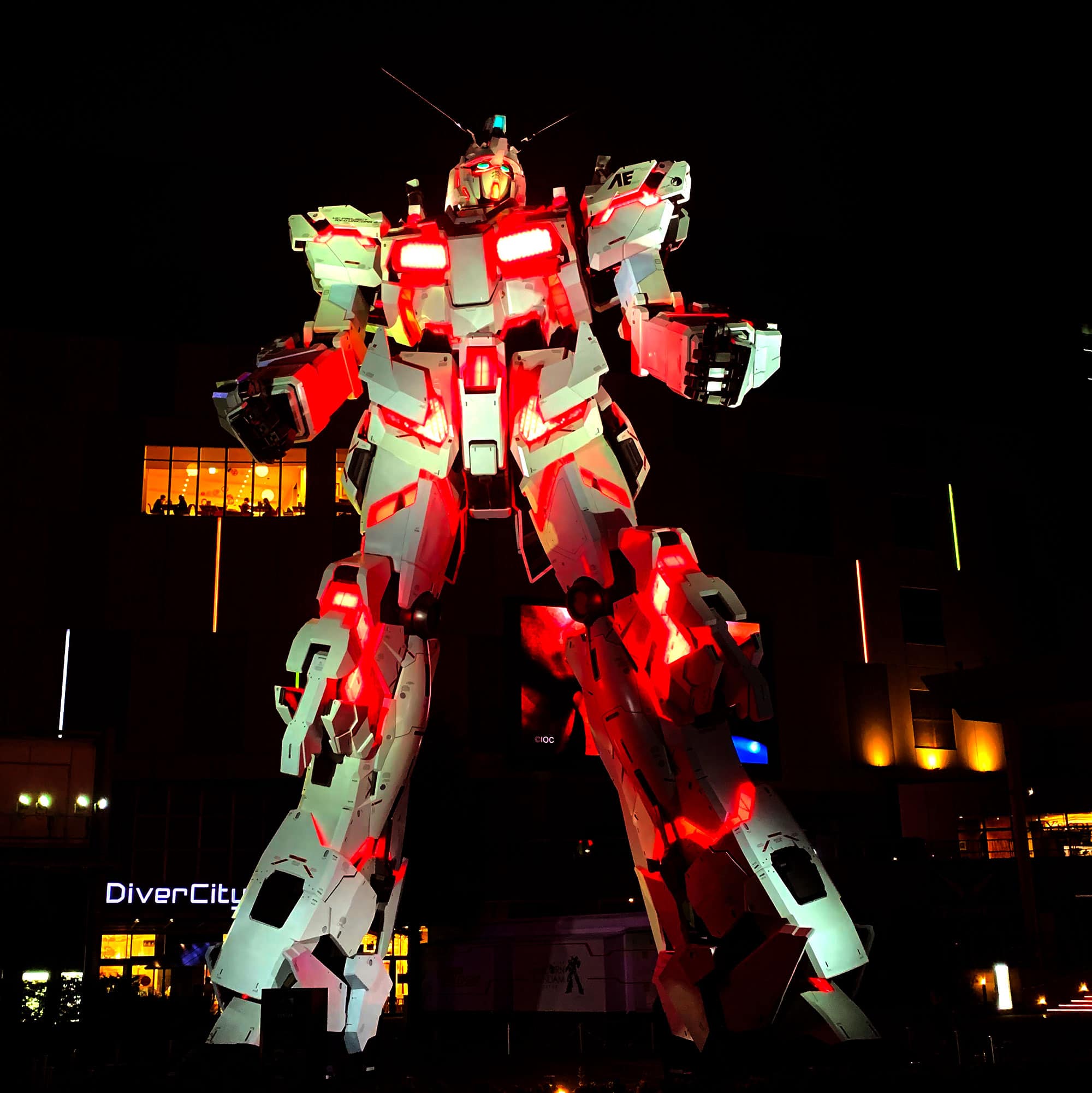 Our room looked out over the impressive Rainbow Bridge and Statue Of Liberty; I didn’t know Tokyo had one too! We were a short walk away from the DiverCity complex, which has a full-size Gundam Robot. Odaiba is also home to the ‘teamLab Borderless’ art project and Toyota MegaWeb, this is essentially a theme park for all things Toyota. We visited all these attractions, and I can recommend them all — especially ‘teamLab Borderless’, which is incredible (details here). 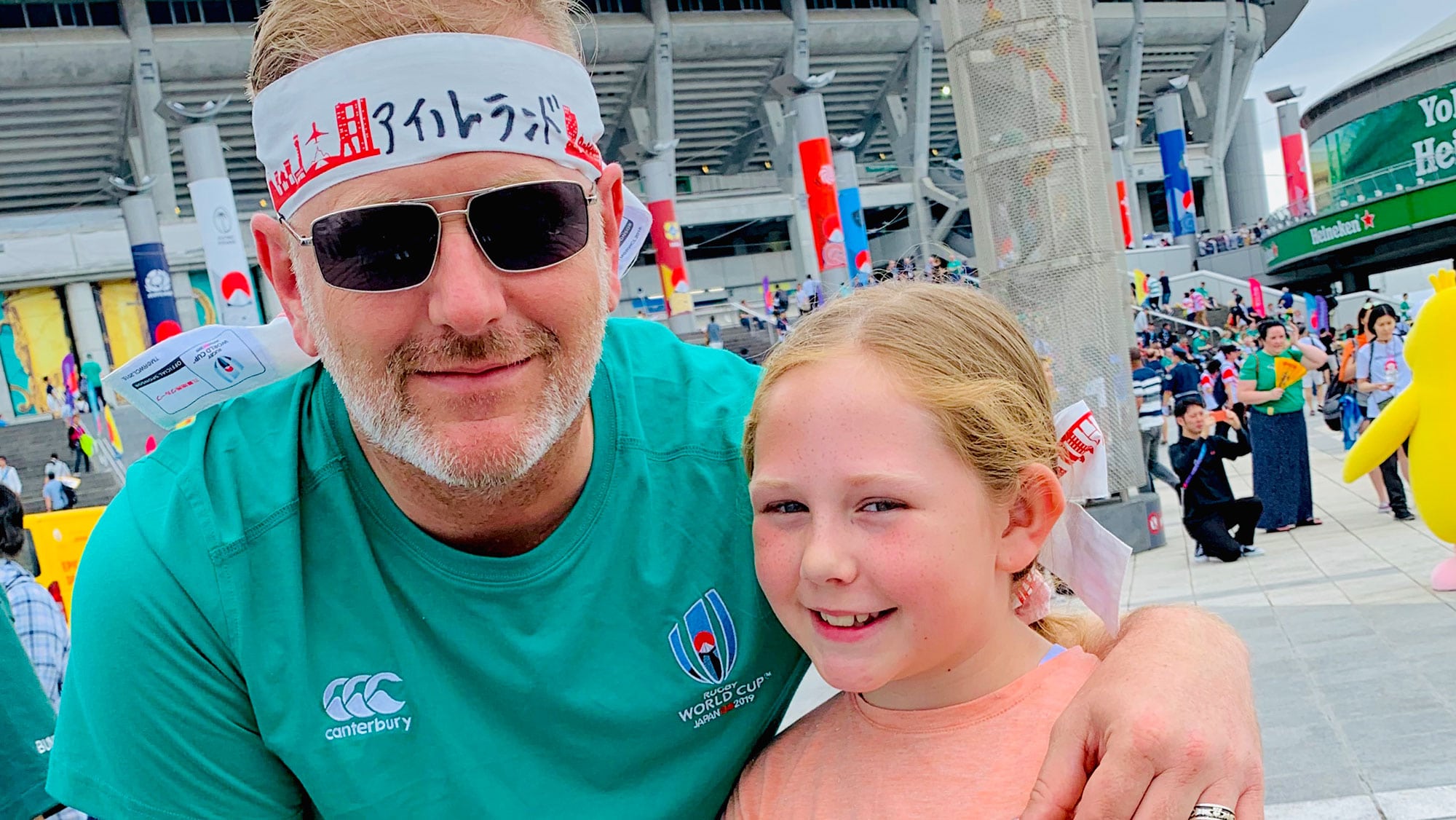 For those who follow Six Nations Rugby, Ireland versus Scotland is usually a cracking game. Typically played in February or March, my overriding memory of watching previous encounters between these two teams is being frozen stiff in Murrayfield. So it was a pleasant change to watch this match in 28-degree heat, although it still rained! The general feeling was this fixture would be the toughest game in the group stage for Ireland. If the Irish could kick-off their World Cup with a win against Scotland, they would be in a great shape to top group A (pool A).

The match was played in Yokohama Stadium, the venue for the football World Cup Final in 2002. The stadium is modern with excellent facilities. The organisation around the fixture was top-notch, our seats were behind the posts and gave us a fantastic view.

The game turned out to be less competitive than anticipated. Ireland crushed Scotland 27-3, much to the delighted the travelling Irish fans who outnumbered the Scots ten to one. After the coach journey back to our hotel, the boys and girls in green were celebrating a perfect start to the World Cup. 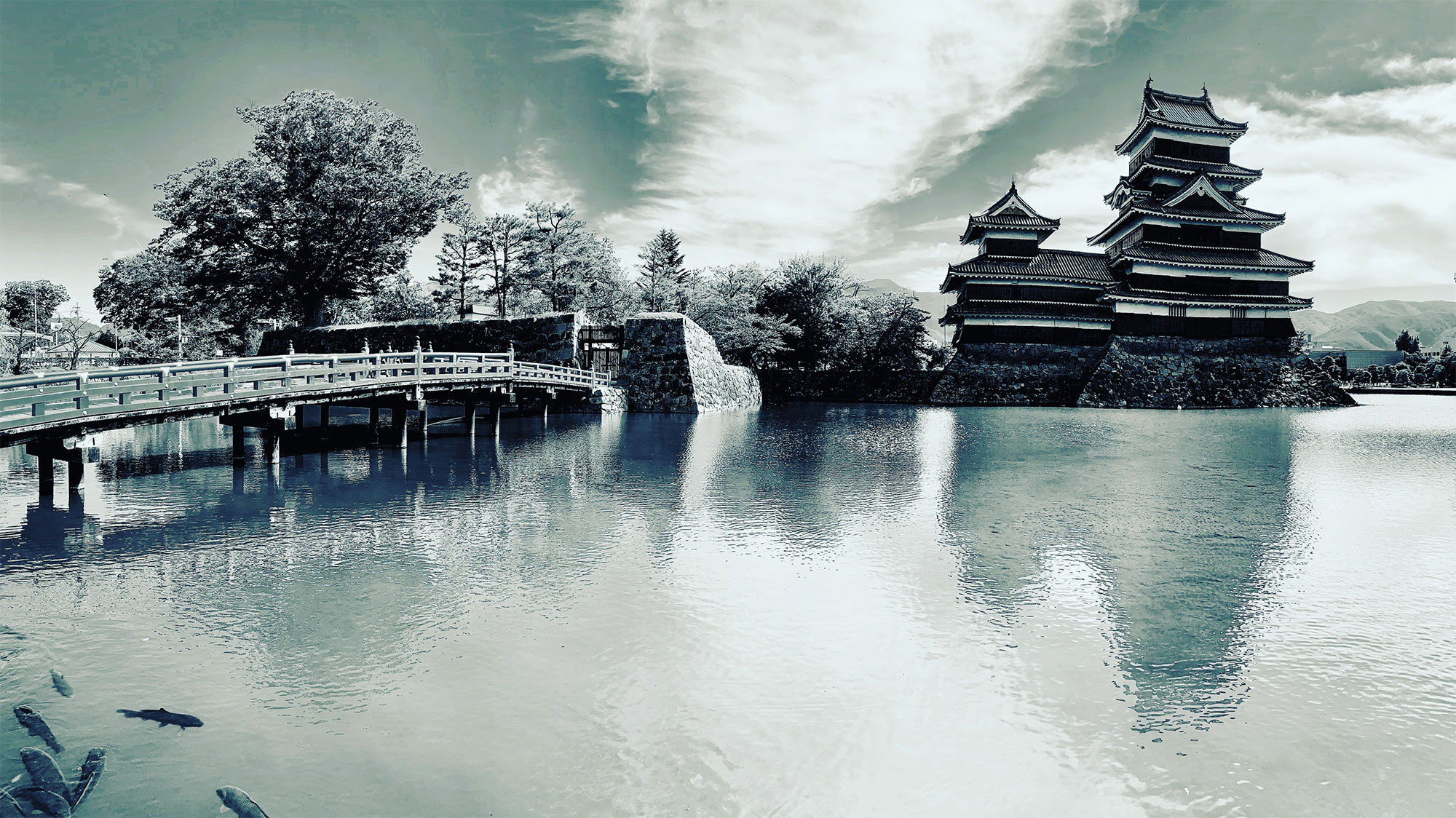 One of the benefits of the package booked with Club Travel was the numerous sightseeing tours built around Ireland’s match schedule.

Our first trip was to Mount Fuji. The iconic snow-capped wonder which is a ‘must-see’ for anyone touring Japan. Unfortunately, Fuji was shrouded in a cloud when we arrived! So I can’t vouch for its beauty, as I only saw the base! Nevertheless, the area around the mountain is spectacular.

The following day we headed towards Hamanako stopping at Matsumoto Castle along the way. Japan’s premier historic castle, it is also known as the “Crow Castle” due to its black exterior. This was one of the most picturesque stops during our whole tour. The castle is set in a moat with a vibrant red bridge which stretches across the water. Once inside the castle, you can learn about its history and even get a selfie with a Ninja!

After spending two nights in the underwhelming Hotel Hamanako, it was time for the biggest match of the tour – Ireland Vs Japan! I’d been looking forward to this fixture since the pools had been announced. While Rugby isn’t the biggest sport in Japan, it has grown in popularity since Japan’s epic World Cup campaign in 2015. 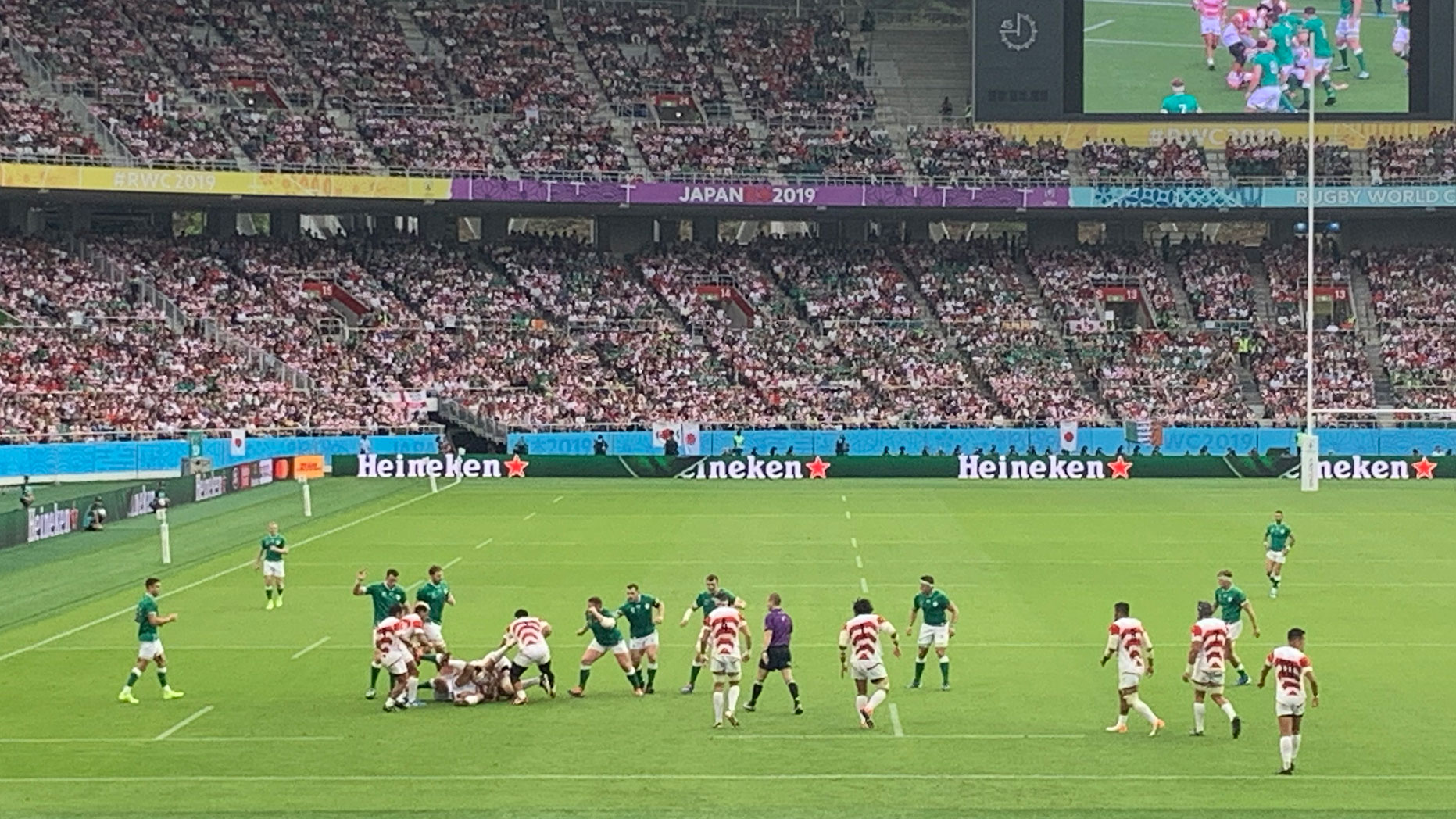 It’s worth remembering how far Japanese Rugby has come. In the 1995 World Cup, Japan suffered a 145-17 loss to New Zealand, the second-worst in the history of the tournament. In the 2015 Rugby World Cup, Japan recorded a miraculous victory over South Africa, beating the two time World Champions 34-32. The game is widely considered one of the biggest sporting upsets in history.

As we took our seats in the Shizuoka Stadium, the atmosphere inside the ground was rocking. As usual, Ireland had a large contingent of travelling fans. Nevertheless, it was clear that the home nation was revved up for the game. As the Japanese Nation Anthem rang out from all corners of the ground, I had a sense this match might not go to script for Ireland.

From the open minute, Japan played at a ferocious pace. Ireland weathered the early storm. Both Ringrose and Kearney scored in the first half, giving the boys in green a slender lead at the break. After the break, I expect the Japanese attacks to slow; surely, fatigue would start to kick in soon? If anything their attacks grew stronger, and Japanese fans could sense a historic victory was on the cards. Ireland had no reply to their intensity, and when Kenki Fukuoka went over at the corner to make it Japan 16, Ireland 12 it felt like the game had slipped away from Ireland. Tamura added a penalty from 35 metres to give Japan another 3 points. As the clock ticked down, sportswriters around the world were already filling their match reports. This game would go down in history as the ‘Shocker In Shizuoka‘.

Had Ireland won this fixture, they would have played South Africa in the quarter-finals. Unfortunately, they would now face New Zealand, the back-to-back winners of the last two World Cups! 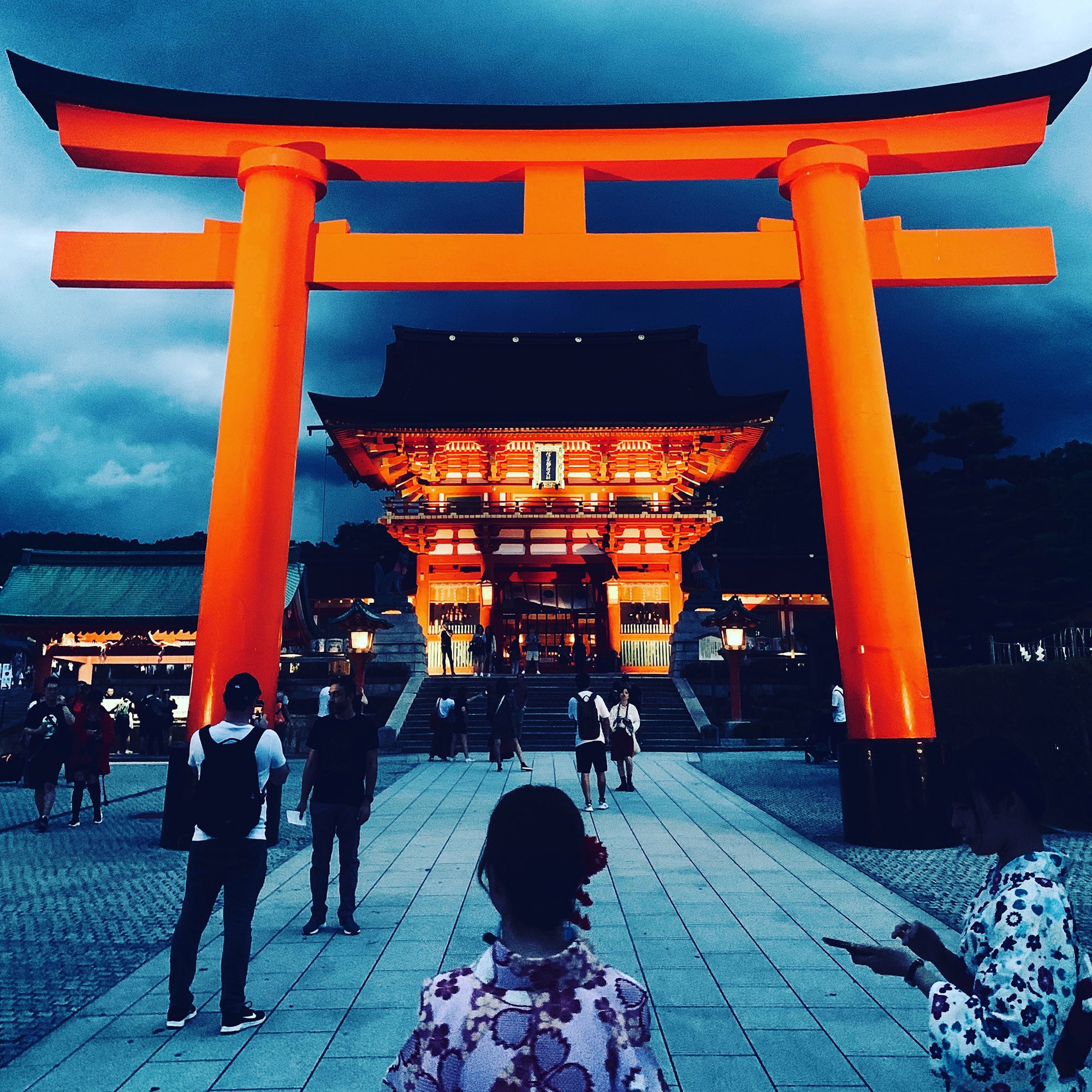 Away from Rugby, our tour moved to the beautiful city of Kyoto. The historical and cultural capital of Japan. Two full free days allowed us to explore at our pace and hit the local shops and tourist attractions, including the incredible Fushimi Inari-taisha shrine, with its 1,000 torii gates. The shrine was made world-famous by the 2005 film ‘Memoirs of a Geisha‘. I was lucky enough to get good photos during a rather stormy visit to the gates.

The final leg of our trip was a short visit to the port city of Kobe for Ireland’s third pool game against Russia. We spent a night in the fabulous Kobe Meriken Hotel on the waterfront. 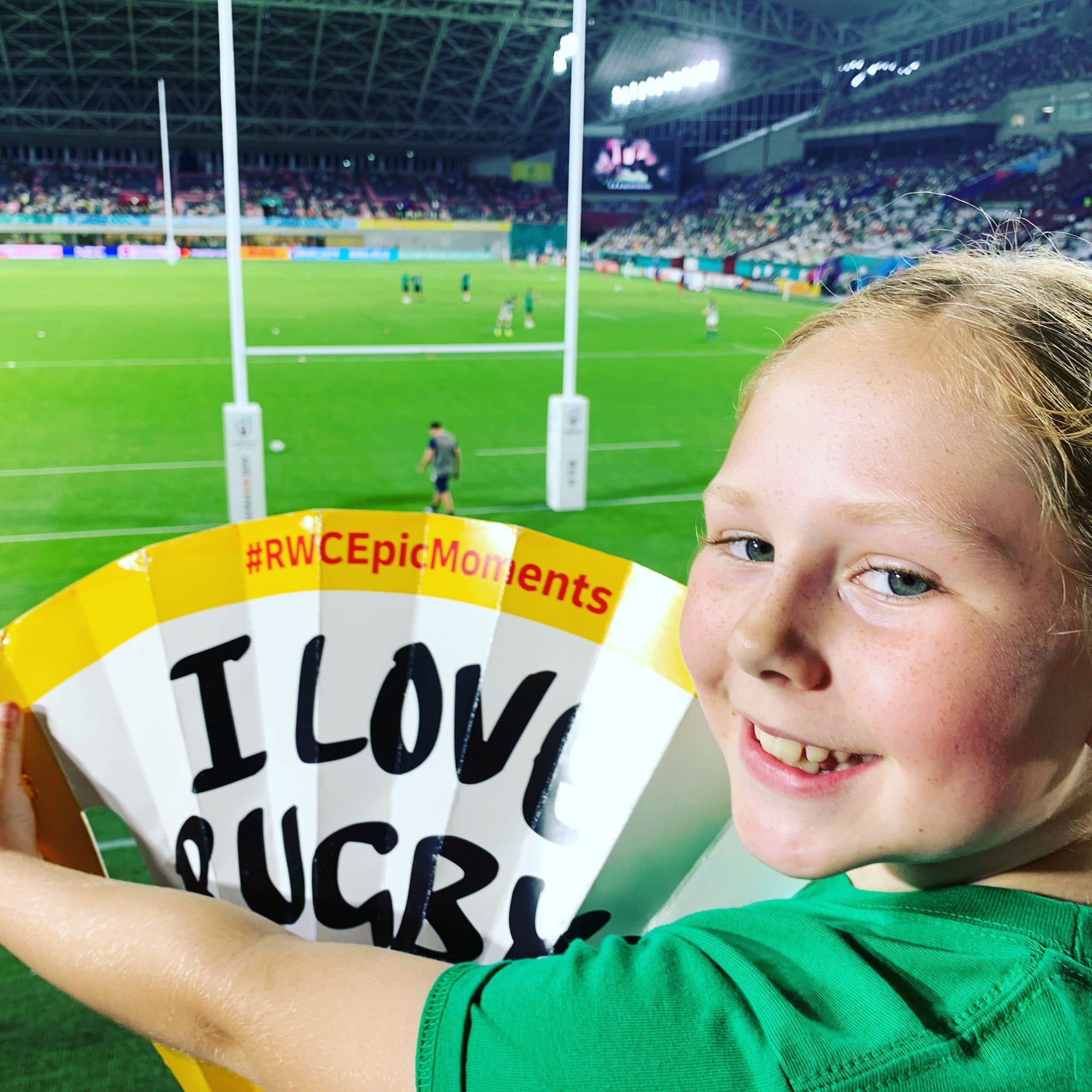 The following day we headed to the Kobe Misaki Stadium to watch Ireland play Russia. The stadium had a familiar feel; it was more like a traditional European football ground. On the pitch, Ireland did enough to cruise past Russia. Securing a bonus point which almost assured Ireland would progress to a Quarter-final against South Africa or New Zealand.

We’d spent two weeks travelling in Japan and could only muster enough energy for a whistlestop tour of Osaka, our final destination. We ticked off the main tourist areas, grabbed a photo underneath Glico Running Man and packed our bags. We’d enjoyed a beautiful country and tournament, but now it was time to say Sayounara. 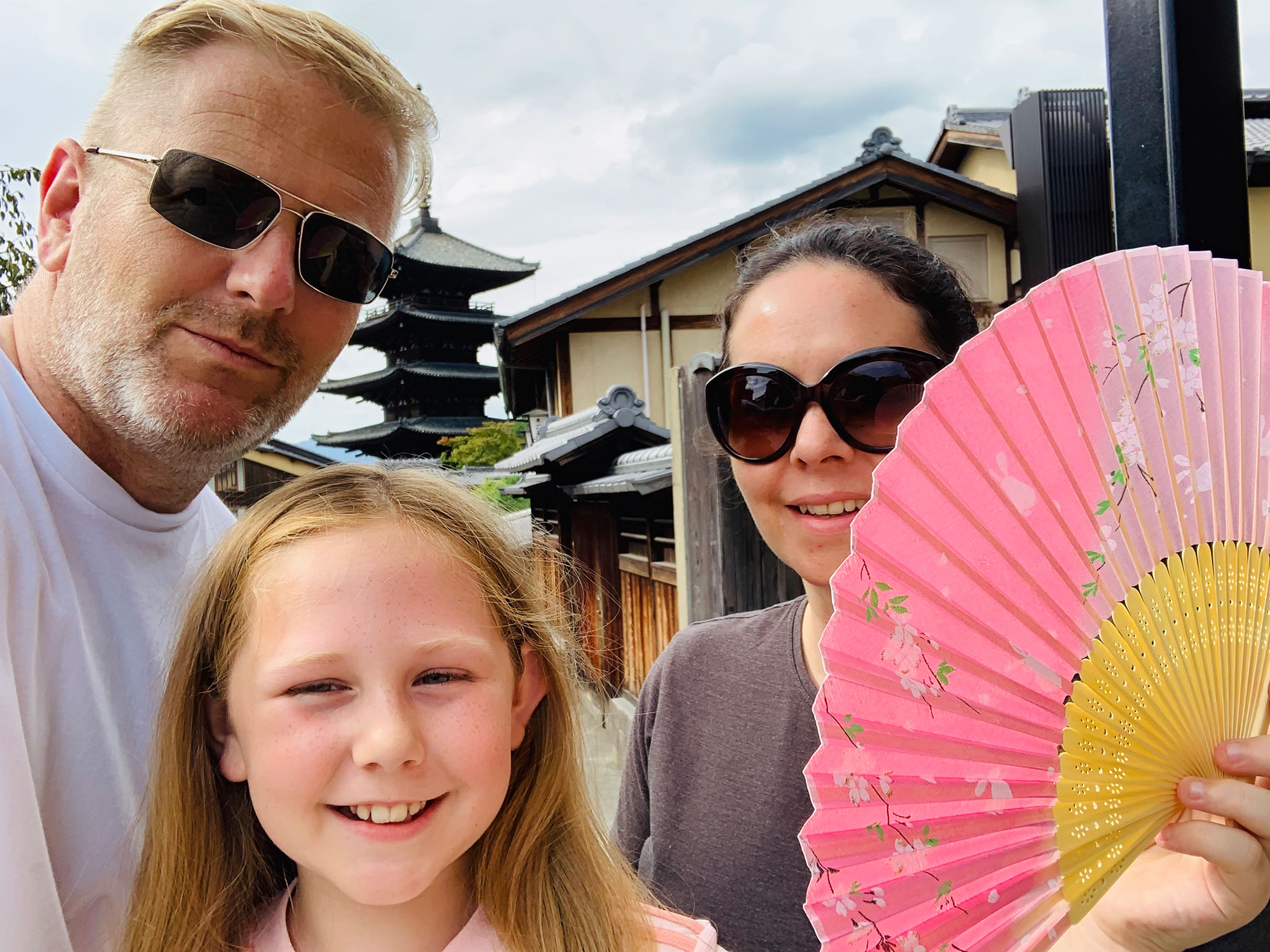